“If creativity means inventing new things
that have never been done, the primary turning point
in dance lies in negation of movements. When the
movement “syllable,” the fundamental component of
dance, ceases to be a physical movement, there
appears brand-new bodily activities that hardly can
be categorized as a dance. The author believes that
Hijikata initiated one of these “un-dances.” When he
was asked the reason why he stopped dancing and
devoted himself to choreographing his disciples after
the success of his Butoh dance, he answered that he
had been dancing, but nobody noticed it.
If the value of dance lies in being seen by
others, the negation of being seen also starts
another “un-dance.” There are two types of
“un-seen dance”: 1 When there is no audience who )
sees the performer, and 2 when the movements are )
not explicit to the outside, but are internal or mental”

Access to the article can be found here: www.ne.jp/asahi/butoh/itto/method/butoh-body.pdf 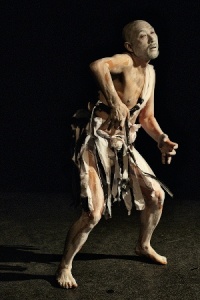